I am busily at work putting together the various pieces and parts from my bundle, to create a collage to share on August 1.  This project was created by Seth Apter from http://thealteredpage.blogspot.com/.    As you know, my bundle was called the Departure Manifestation, and I hoped it would help me relocate to a different area in the state.  So far this has not happened, but I have learned  these things progress in their own time and there are usually good reasons for that, so I haven’t given up yet on the idea of moving away from central Oregon.  In the meantime, and I don’t know how much “the bundle” had to do with this, but I have a lot more time now for art making, and its been a very lovely summer!  This was a great project!

The Bundle, ready to hang. 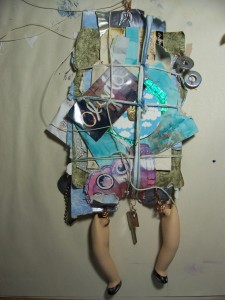 The bundle hanging outside in the night February 2009.