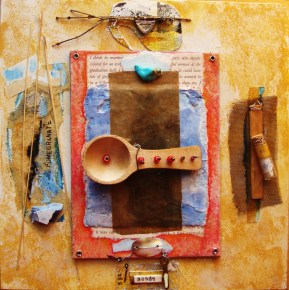 I used the symbolism of the pomegranate in my collage to tell this story of the Greek goddess Persephone.    The red beads are actually very old African trading beads called “white hearts” because of their white center, but I thought they looked like little red seeds, and the little wooden spoon symbolizes eating.  The three long thin bamboo pieces to the left represent sheaves of wheat which is one of Persephone’s symbols as the goddess of spring, which she later came to be called after her ordeal which I’ve mentioned below.  The turqoise stone at the top is a Native American symbol for the sky which Persephone loved and needed while she was captive.  It photographs as a “heart” shape, but it is really a nugget.  I never noticed it had that shape until I looked at the photograph, but the heart is okay and fits with the story. The branches at the top are for the six months Persephone is in the underworld, and the clock hands represent the passing of time and the seasons of the earth, which is really what this whole story is all about!

Persephone was a Greek goddess, daughter of Zeus and Demeter.  When she grew to be a teenager her loveliness attracted the god of the underworld, Haides, whom being a god decided he could take what he wanted, when he wanted it, and he wanted Persephone for his own, so he snatched her without explanation by renting the earth and yanking her below.  Of course she was very unhappy  and wouldn’t eat anything and generally moped about crying for her mother.  Demeter her mother looked everywhere for her and finally became so frustrated she started killing off the growth of crops since she was goddess of agriculture and growing things, and as powerful as any other god.  Zeus knew he needed to do something, and since he was one of the ‘good ol’ boys,” and the brother of Haides, he already knew exactly where Persephone was.  So he talked to Haides and told him the situation and how the earth was dying because of Demeter’s anger at losing her beautiful daughter.  Haides offered Persephone a pomegranate because the secret about eating in the underworld is if you eat anything while you’re down there you can never return to the top side and of course Haides hoped she would be hungry enough to eat the pomegranate.  She ate only six seeds and ordinarily that would have been enough, but the boys decided to strike a deal with Demeter and offer Persephone for six months on the top side and six months in the underworld.  They thought that seemed fair.  Demeter took it and the earth began to grow again.