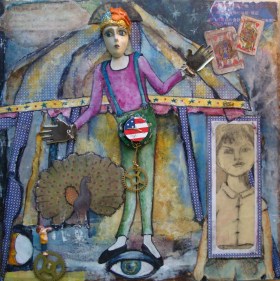 "Jack Dreamed of Joining the Circus"

I found the head for Jack, and thought it held a sort of twin peaks mystery.  It began life as a pin for someone’s lapel.  I cannot imagine who would have worn it.  I removed the pin back and painted a couple of layers of thin gesso over the face to tone down the very bright paint job.  A whole story began evolving as I created the “circus” background with scraps of torn paper, junk mail envelopes, and other junk mail finds.  Once I had a tent like background and a night sky with stars I added Jack’s head, I decided to add the starbuck’s halo, but blocked out bucks and just left the word star.  I did a quick sketch of Jack as a boy looking through a junk mail window, that was when I realized that Jack had changed his name to Jacques when he found his boyhood dream of joining the circus a reality!  I had done a sketch years ago in one of my journals of a sad clown standing on an eye and I thought it seemed right for Jack too.  I sketched him out on deli paper,cut him out and glued him down and painted his costume.  I already had his hands, I don’t know where I got them, they were clips that had a ring on them for suspenders I think.  I took the backs off and wired them on for Jack’s hands, then I painted on some suspenders for him with tiny hands at his waist.  Jack’s hands are a very shiney chrome, kind of difficult to photograph.   Down at the bottom is a very little boy riding a gear wheel – maybe jack as a very young child?  Of course the cards in the upper right are jacks.  Jack wears an american clock face on the front of his trousers with a brass pendulum attached to a clock gear.  I like that his expression is a bit hesitant.  He is the star of carnival! 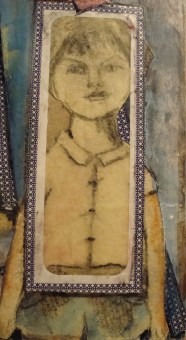 Detail of young Jack looking through a window

Detail of toddler Jack on a wheel 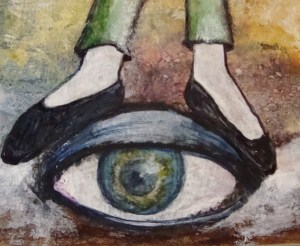 Detail of "visions from a golden eye"

Tell me about it... Cancel reply