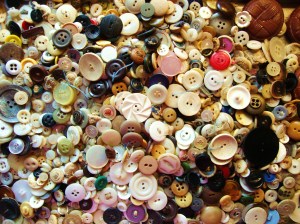 I have just recently discovered the amount of stuff available on ebay, new to this phenomenon, at first I was overwhelmed, but I am an old hand now.  This prolific amount of stuff is an amazement to me – all I have to do is say, gee I wish I had “some,”  insert whatever desire comes to mind, and I am immediately rewarded with hundreds, or even thousands of choices!  A few days ago while I was stitching on my Tattered Gatsby(s) I wished for buttons and voila!  A big bag of buttons arrived today.  But these are no ordinary buttons! 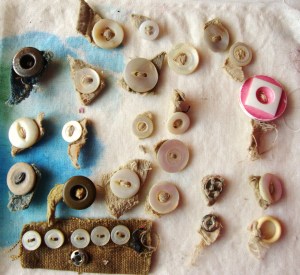 Very old mother-of-pearl, still attached to bits of cloth, as if someone just cut the buttons off with a hunk of the garment still attached!  Which, of course, that is just what they did!  I love it when I find buttons with thread still in them, but with a scrap of fabric, oh my, its wonderful!  These do not require “aging,”  they are already quite aged, and actually dirty, which makes them even better to me.

Strung together for safe keeping.  All of these are mother of pearl except the very large white ones.  I love to imagine who strung them together, what garment were they taken from, and how many times were they used since their original removal?

Very large (1.5 inch) still attached to their original cards.  These probably aren’t so old, but they are really big and heavy mother of pearl.

They said it was about 500 buttons, but they didn’t say how old and neat they were – and  its way more than 500! Sometimes I am surprised that no one else wants what I want – no one else saw anything special in these!  No rhinestones, no fancy shapes, and it wasn’t mentioned that so many of them were the sought after mop!  A new term I have recently learned in the button world. 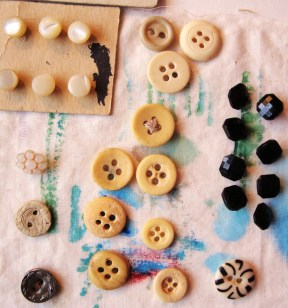 The yellowish ones are very old underwear buttons, either bone or “vegetable ivory,” another new term to me, and the little black and white one is a painted china – looks like a zebra, another new term in the button world!  The black faceted ones are glass.  The little greyish two holed one feels like its made out of rubber? 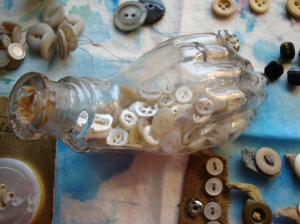