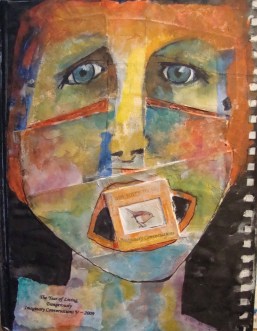 Journal Cover – I cut up a drawing and put it back together again, glued it to a page in a sketch book – after the journal was finished, I knew this was to be the cover.  The year 2009 began like most any year – lots of resolutions – lots of ideas, hopes, and, of course, the unknowns.   I guess the first thing that happened was my immediate boss at work gave notice.  We worked so happily together and balanced each other very well, I knew it would be a difficult transition working for someone new.  She suggested I apply for her position, but we both knew I wouldn’t survive working for her boss, which was the reason she was moving on.  Corporate hired someone new, and in March I lost my job.  Not a good time to be job hunting, to say the least. 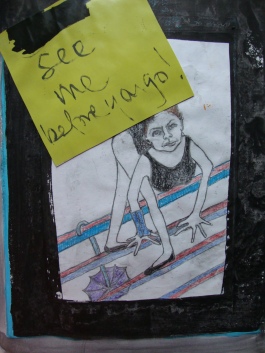 A sketch of my new boss, that became a mini-painting and started a series of other little paintings I called Circ.

My senior photo from high school, I am 16 years old.  Thought I knew so much more.  It just seemed appropriate to put this old photo in this journal – a journal of moving backward and being dragged forward full speed.

A sketch for a painting that I am still working on.  Its a very large painting ( for me) and it’t taking a lot of time to create. 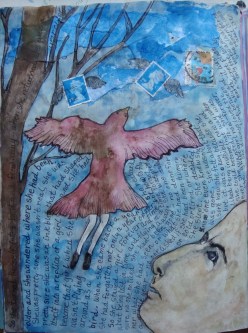 Now that I’m not working there seems to be a lot of time for thinking about the past.  Also a lot of time to work on letting go of the past, easier said than done! 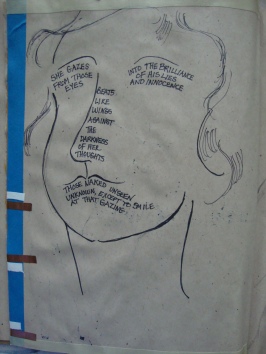 Jobless, and now bad news from my doctor.  This year just isn’t getting any better.  I wish I could fly away.  I wish I were a million hours away from this moment, not  in this time, not here – be somewhere else, anywhere else, be anyone but who I have to be now. 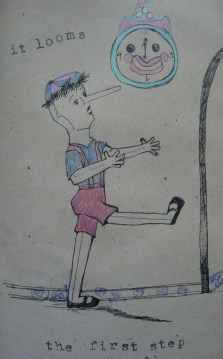 I am standing in fire. 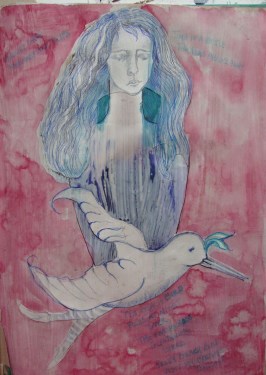 An old blurry photo of me at age 30.  Aren’t we supposed to know most everything by then – we are adults – but I still knew very little.  I look at my face and I see how trusting and naive I was, even at 30.  But I like  this photo, I like the person I was, inspite of being naive.

A copy of a drawing I did – somehow I have lost the original – but I had a copy of it in the computer, such a sad determined face.  I feel myself growing angry, then sad, then angry, determined, afraid, staunch.  I cannot be defined by this thing that has invaded.  I am determined to fight this on my own – I kept it secret for months. 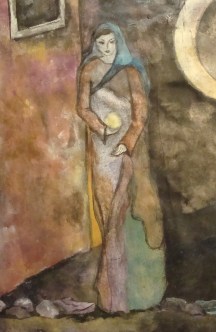 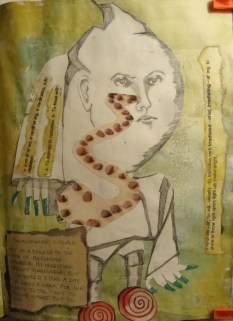 Thirty-three stones – one a day, five days a week, for six weeks.  I gathered a stone each day after the radiation treatment and I keep them in a jar where I can see them often – a reminder that I am determined!  December 1, 2010, saw my one year anniversary from radiation.  The disease did not define me, the experiences I grew from defines me.