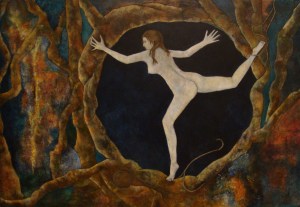 This is a painting I began in 2005.  My goal for 2011 is to finish some canvases I began several years ago.  This painting has undergone many metamorphoses.  It was one of the first canvases I worked on when I began painting again in 2005, and quickly discovered I didn’t have the skill I needed to produce the inner vision I had of the subject matter.  I still feel that my skill is lacking and I am disappointed in the figure as looking more cartoonish than I envisioned.  I will continue to tweak the figure, but at this point I find that more “tweaking” is causing more mistakes that need correcting, so I am stopping at this point and waiting to see what happens at some future date.

I have always had a fascination with the story of the Garden of Eden, and imagine the leaving as chaotic and frightening, especially for Eve who was blamed for everything!   My ‘Eve’ is jumping bravely into the unknown, who knows where her partner is, but she is on her way, giving a careful look to the burning  guardian of the gate.  I have also  read of ‘Lilith,’ who was said to be the first partner of Adam, but she was so uppity and independent she had to be banished.  Perhaps this is not Eve, but Lilith.

Detail of “Leaving Eden” (left side of painting)

“Leaving Eden” (left side of painting) 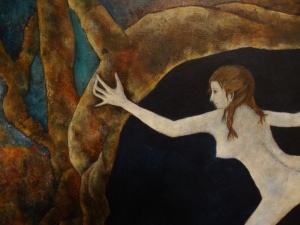 Detail (right side of canvas) 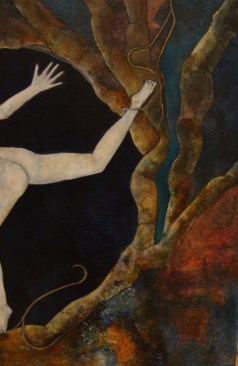 Tell me about it... Cancel reply