Unfinished canvas #2 is finally finished!  I am really happy to be finishing these ghosts, bringing them to completion and daylight. ” The Mermaid’s Hands” began with a whole mermaid.  My neighbor suggested upon viewing it that I add some glitter;  I think that’s the moment I wasn’t waiting for! I began by painting it over with black gesso and wiping and blotting it off while it was still wet, as the hands began to emerge I realized I didn’t need the whole figure – the hands were less “Ariel” without the body!  No glitter needed! (ha)

I have one more large canvas to finish and I will be finished with the unfinished.  I don’t usually leave artwork unfinished, so these three were really bugging me.  The last one is quite large, but not a lot of color, hopefully it will go fairly quickly and I can begin something new! 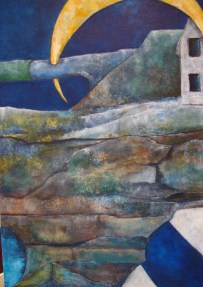