I started this painting by gluing down a piece of dressmaking pattern tissue and letting it wrinkle and crease, and then covering it with gesso.  Then I sketched in the head and shoulders and glued down some paper ephemera;  a page from an old school book, a catalog page of old clocks, and a bird.  I wanted to use green in the background because it’s a color I seldom use, and I was thinking of the outdoors in the background.  After I finished this painting I decided to glaze with a light brown to give it a sepia tint.  It didn’t work and she looked like she probably had malaria jaundice when it was finished!  I went back in with titanium white and burnt umber and tried to “fix” it – but it was probably better before I fooled around with the glaze.

Daisy Winchester was my grandmother.  Of course I only knew her as an older woman, but when I was about fifteen I saw a photo of her taken when she was about nineteen.  I remembering being so amazed that she looked like another person when she was young!  It was a challenge to paint what I remember of the photo – of course I’ll never know if I have come even slightly close to what she looked like – but I like to think I have.  She was born in 1888 in Indian Territory, Oklahoma.  She told me once that her parents rode on one of the last great land runs in Oklahoma and she accompanied them.  She was about twelve at the time.  She told me that she sewed her wedding dress while riding horseback during this long ride, even though she had no idea who she would marry.  She said it was just something girls did in those days.  I am imagining that it might have looked like the dress I’ve painted in the painting.  She told me it had lots of tucks and pleats and was made of white “flannel” (very lightweight wool).  She sewed all her own clothing and taught me to sew on an old treadle sewing machine.  I used to make her an apron for every holiday.  She always wore a clean apron over her dress – it was just part of getting dressed for the day.  She had twelve children, ten survived.  One died after only 24 hours, and one died of a gun related accident at the age of fourteen.  She raised them all during the great depression in the Oklahoma dust bowl.    She was a no-nonsense kind of person and only attended school up to third or fourth grade, which is why I used the old textbook pages in the background, however she was not illiterate, and always read the newspaper every day, and taught me how to spell and write my name when I was about 4 years-old.  She quit school  because she was needed to help her family with the farm.  She spoke with an old-fashioned cadence, using words such as thee, and ye. She loved farming, and the outdoors.  That’s why I chose the color green for the background. 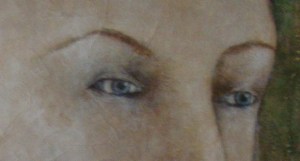 The sketched in painting.