I continue to play with oil paint – trying to learn how to control it; not easy!  So I’ve been playing around with abstract blobs of color -trying to learn how to find some depth in smearing paint around.  I used a couple of eucalyptus leaves from an old dried bouquet of same.  I buy bunches of eucalyptus leaves from the grocery florist – these “silver dollar” shaped ones grow so gracefully, and sit so pretty in a vase, I like them on their own without flowers.  I leave them until they become too dry and dusty – but their scent remains reminding me of the central California coast – my favorite place to dream.

You can faintly see a line of stamping across the bottom – more about that below.  I tried to paint over it after I’d stamped it, but it keeps coming back! 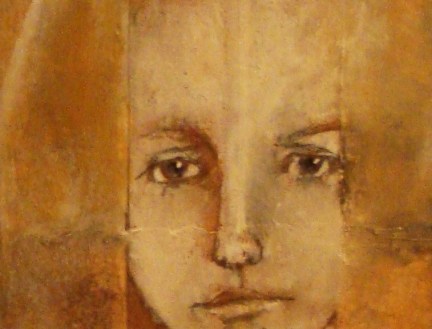 A while back,I did some thrift store browsing and found a large bag of wine corks – it seemed to have possibilities so I brought it home and dumped it into a jar, after my grandson found them in a drawer still in the bag – he thought they looked quite interesting too.  When he grew tired of looking at them, they became missiles with the dog as target practice, so we put them in the jar “to look at”.

Now some of them live in a recipe box.

As stamps for journaling and collage.  Obviously I’m not a very good stamp carver – but they do their job of adding some interesting little point of view on collage pages.   They are dry and nearly brittle, so carving is more miss than hit! 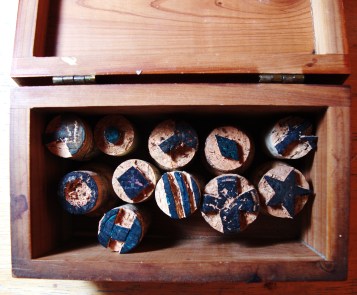 Rustic, or I guess the word is primitive.

Anyway, this is how they look stamped on paper.  Marks for mark making!

On another note: I am getting totally fed-up with wordpress.  It seems for the last 6 months everytime I post something, it either disappears when I hit “publish” or it becomes rearranged so that text and photos are out of context.  I have trying “save draft” but then the entire post disappears except for the title.    So it takes me hours to make a single post because I lose my text and have to rewrite most of it, which is really frustrating, or the photos disappear – but only on the post screen that you all see, but not in the post record – so if i don’t keep checking the post screen I don’t even know only half of anything is there.   I don’t know what’s going on, but haven’t found any solution to this issue.  If any of you know what I’m doing to cause this, let me know.  Personally I don’t think its me, I think its them, as it is consistent this last six months.  I’m looking for another blog home.